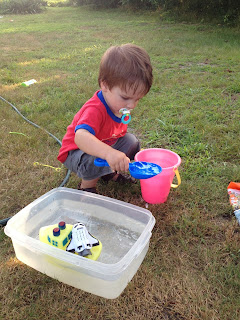 So there my sister and I were last week, driving down the charming Cape Cod road happily chatting when, from behind us, James piped up, “Here comes the binky!” and a binky landed in my lap.

Hold on a second, you say. Isn’t that kid almost three years old? Isn’t that way too late for a binky?

Well, yes. I suppose so. But I do have to admit that Lucy had a binky for a very long time. At least until four. (I am ashamed to say that I don’t entirely remember how long she had it; I wouldn’t be surprised if I were presented with photographic evidence that showed she had one for another year or so.)

With Lucy it wasn’t a deliberate thing. We were first-time parents and, to be honest, it was just easier that way. I mean, I considered the whole cut-off-the-tip-of-the-binky-so-that-it-doesn’t-have-the-whole-suction thing, the let’s-tie-it-to-the-balloon-and-send-it-off-with-a-proper-good-bye thing, the ceremonious-collect-all-the-binkies-and-throw-them-away thing (can you tell I’m an avid reader of parenting magazines?), but it was always a half-hearted attempt and it never got very far.

My husband, on the other hand, just shrugged his shoulders and said, ‘Whatever. She’ll be done with it when she’s done with it.’ And, guess what, that’s exactly what happened.

Flash forward ten years and here we are in the same place with James. This time around, however, it is entirely deliberate. It’s part of the strategy in fact. First of all, it’s come to my attention that if a binky is in James’s mouth, nothing else is. Although I do recognize that’s not the most child-proof method of child-proofing, it does come in handy, I must say. Particularly when, say, he’s playing in a garden that has a big, honking Nightshade plant (i.e., deathly poison) about three feet to the left.
If I were smart, I would say that that’s the true reason that we haven’t done anything to begin the binky separation process. But that wouldn’t be the truth. The binky is a key element in our discipline strategy with James – because nothing else works.

Being that James is #3, we aren’t entirely surprised that he didn’t respond in the way the first two did. We learned that lesson when Will came along. Take the whole counting thing, one of the universal discipline strategies across time. What parent doesn’t use the “I’m going to count to three” phrase on a regular basis? With Lucy, we never even got to two. Heck, we never got to two and a half. She’s a rules girl, and by the time we got to two, we were well on our way to whatever point we needed to make. Will, on the other hand, would ask, “But what’s going to happen when you get to three? Will you take my cars away? Will I go into a time out?” And then, based on the answer, he’d decide whether to do what we wanted or not. I wasn’t thrilled, but at least I had a sense of where things were heading.

But now there’s James. James just takes a passing glance at the rules and then leaves them in his dust. When I start counting to three, he just, in his sweet little voice, counts along with me. “Twooooo… Threeeeee…” It’s all I can do not to end up laughing hysterically. Forget following through with any kind of threat. Not to say that James doesn’t end up in his share of time outs, but it’s not the end-all-be-all that it was once upon a time.

Which brings me back to the binky. James couldn’t care less if he ends up in a time out after we get to three. That’s just a chance for him to sing to himself for three minutes. But if we threaten to take away his binky, well, that’s a whole other story entirely.

For example, when I found myself driving along at a fair clip and then all of a sudden there was a binky coming my way, I knew that the first thing I needed to do was tell him that he was never to throw things in a car, and most certainly not in the direction of — or at — the driver. The second thing, of course, was me saying that he wasn’t getting the binky back and that it was in a time out for a really long time.

The fact that he barely reacted to that was suspicious.

So I looked into the rearview mirror, only to discover that he was sitting there with a whole otherbinky in his mouth. He’d apparently taken to carrying around an extra. No wonder he wasn’t concerned.

But he’d thrown it in the car. And he’d thrown it at me, i.e., the driver. The problem, however, was that by the time I’d realized that, it was several minutes later. And we were on a country road that had nowhere I could pull over to make my point right away, something that all of those parenting magazines I read say is crucial with kids this age. Then again, when my other kids were this age, they wouldn’t have thought to have a second binky in reserve.

A few miles down the road, I saw a turn off. Cockle Cove Road. Even though it was now ten minutes later, I pulled over, got out of the car, and went around to his side and opened the door.

“No throwing in the car. No throwing at the driver. This binky is in time out until we get home.” Binky #2, gone.

He cried the whole way home.

I didn’t like it – and I don’t particularly like that I know what his weakness is and that I use it. But that’s the line we walk as parents, isn’t it? It’s our job to make sure that, well, they don’t grow up and keep throwing things at the driver. And sometimes it isn’t pretty.

In the meantime, though – and as long as he doesn’t keep throwing it — he can have the binky.